The records of the Budleigh Salterton Baptist Church go back to 1843. In that year, a small group of Independents met in the town for worship, first with the Wesleyans, and then in a room of their own. Several baptisms were recorded almost immediately and the growth of the fellowship led to the building of the Ebenezer Chapel in Little Knowle.

Commenced in July 1844, it was completed within the year costing £204 -17s -10d – the debt being finally cleared in 1849 with help from the London Baptist Building Fund. A gallery was given by a well-wisher for the Sunday School established in 1848. Twenty years later a hall was built behind the Church with further additions including a vestry. Trust deeds dated 1844 show the land was purchased for £40 – ‘to build a chapel for the use of Protestant Dissenters of the denomination of Baptists’. Trustees included a Salterton schoolmaster, an Exmouth shipbuilder, a druggist, a preventative officer and two ‘Gentlemen’. 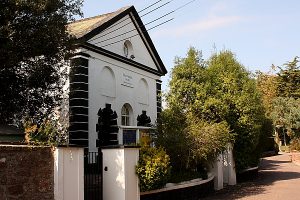 The Chapel was opened for services on December 5th 1844 and the Church Fellowship was constituted with 10 members three months later. The Revd. T. Collings was invited to become Pastor at an annual stipend of £30. In 1890 the Revd. J. E. Thomas came to the Church but before long left to form a daughter Baptist Church in Exmouth – a forerunner of the fellowship now meeting in Victoria Road. His successor at Ebenezer was boarded out with one of the members in lieu of salary and supported with gifts from members. By 1896 membership was 38 with 24 Sunday School scholars and 4 teachers. A pipe organ was purchased in 1897 for £70 and used for the next 24 years. One of the Ministers early in this century spent 7 days in Exeter Jail for refusing to pay the proportion of the Education Rate devoted to Church Schools so supporting the movement that led to the downfall of the Balfour government and the Liberal victory of 1906. The early days of the twentieth century were not easy for the Church but the members managed to maintain their financial independence.

The Sunday School restarted in 1936 having been closed since 1923. The Second World War period also had its difficulties. In 1950 the Church purchased 19 Clarence Road as the Manse. This did not prove altogether satisfactory and a plot of land was obtained for a new Manse to be built in Elmside. This was financed by generous giving from a number of sources including the proceeds of a lecture series donated by Stuart Hibberd who had retired from the BBC to the town. About this time the Society for the Preservation of Ancient Buildings declared the Church in Little Knowle “…the oldest Church building in the Town as a building of special historic interest”. By 1957 the membership had risen to 60.

Besides its strong links with the Baptist 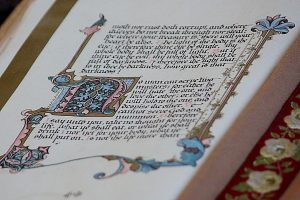 Denomination the Church also has had strong missionary ties. These were enhanced by the ministry of the Revd. Ernest Madge (1975-82) who retired to the town after service in China and India and 17 years in London as Overseas Secretary of the Baptist Missionary Society. This strong link continues through the presence in the Church of Revd George Lee and his wife, Betsy, who served with BMS in Sri Lanka. The link is also maintained through our current link missionaries.

In June 1988 a new hall, kitchen, and toilets were erected at the rear of the site and the interior of the sanctuary was refurbished.

The Church remains in good heart, having recently called new Ministers, and as we look back with gratitude to God for all those who have so faithfully given and served over the years. We now look forward to the opportunities we are presented with as we seek to provide continued service to God in our town in partnership with the other Churches.