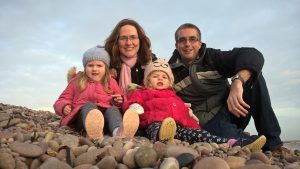 James and Julia Henley met in the Autumn of 2007 and were married in September 2009 whilst at Spurgeon's College in London. Following theological training, they were both ordained as ministers in the Baptist Union of Great Britain.

Following a period church planting in Peru with BMS World Mission they were called to the pastorate here and began their joint ministry in July 2014. They are passionate about the local church and the difference it can make in people's lives.

James loves photography, walking and climbing. Before becoming a minister he cared for adults with learning disabilities and volunteered with a sailing charity teaching young people to sail.

Julia loves music and especially singing. She also likes drinking coffee with friends and walking in the countryside. In her former life she was an Occupational Therapist, and worked primarily with a Community Rehab Team in Hampshire.

They have two young daughters. Katie was born in January 2013 and Freya in December 2014.  To contact James & Julia please visit the 'Directions & Contact' page.

James & Julia are supported by a team of 'deacons', who have responsibility for the practical and spiritual oversight of the church.